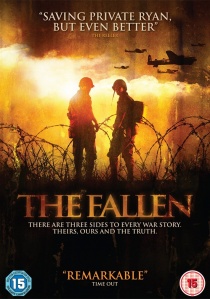 The winner of numerous international film awards, including Best Film and Best Director at the Milan International Film Festival, director Ari Taub's critically acclaimed World War II epic, The Fallen, released on DVD by Scanbox Entertainment on 30th July 2007, is a war film with a difference, one that has already been hailed by Time Out as "remarkable", by LA Weekly as "excellent" and by New York's The Reeler as "even better than Saving Private Ryan".

While graphically depicting the horrific spectacle of the conflict, Taub's film also focuses on the human stories and through strong characterisation brilliantly portrays the divergence in values, morals and patriotism between the differing nationalities involved in the war, while at the same time exploring the basic similarities of the people caught up in an unforgiving situation.

Highly entertaining and often very funny, The Fallen delivers the familiar "war is hell" message in a refreshingly original manner that recalls the spirit of films like Catch-22 and M*A*S*H. Despite this sometimes lighthearted approach, the film still manages to expose the horrors of war and serves as a topical reminder of the folly of the various military conflicts still occurring throughout the world today. Set in Northern Italy toward the end of World War II, The Fallen recounts the everyday wartime experience as seen through the eyes of three small groups of soldiers: the United States Quartermaster Brigade of the 5th Army, an Italian reconnaissance unit from the Monte Rosa Division, and the ill-fated German 362nd Unit along with its ragtag bunch of Italian partners.

As the American supply soldiers endeavour to deliver ammunition to the front line, their journey becomes a rapid descent into hell, one full of setbacks that increasingly make the success of their mission seem less likely with every step. The German unit, almost resigned to the fact that defeat is inevitable, has set up a rest camp as the superior officers struggle to maintain morale and discipline among their beleaguered troops. And caught in the middle are the Italians, with their divided loyalties causing bloody conflict as the fascist soldiers confront their communist partisan brothers in what is nothing short of their own civil war.

A timeless and moving tale of humanity that proves there are several sides to every war story, The Fallen is an exceptional film that demands to be seen.

UHD
After more than thirty years of service as one of the Navy's top aviators, Pete 'Maverick' Mitchell is back where he belongs as Top Gun: Maverick flies onto DVD, Blu-ray and 4K UHD 31st October 2022 from Paramount Home ... END_OF_DOCUMENT_TOKEN_TO_BE_REPLACED
Top PicksView