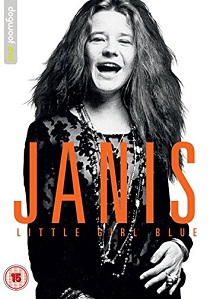 Janis Joplin is one of the most revered and iconic singers of all time, she electrified and thrilled millions of listeners with her powerful, soulful voice and blazed new creative trails before her tragic death at the age of 27, in 1971.

Oscar nominated Amy J. Berg (West of Memphis) presents a moving, insightful portrait of the original Rock Chick, in the hugely acclaimed feature documentary Janis: Little Girl Blue, which makes its way to DVD and VOD on 9th May 2016 courtesy of Dogwoof.

With massive hits including Me and Bobby McGee and Piece of My Heart and such classic albums as Cheap Thrills and Pearl, Janis embodied the musical and cultural revolution of the 1960s. Yet her on-stage bravado and uninhibited sexual persona hid hurt and insecurity stemming from her childhood in conservative Texas. On relocating to San Francisco and discovering the blues, she found an outlet for her pain and loneliness and fell into a community that would embrace and celebrate her talent.

BD
From the Wachowski brothers and Joel Silver, the masterminds behind The Matrix trilogy, comes another intriguing, action-packed fantasy-thriller in V for Vendetta, released on 4K UHD 2nd November 2020 ... END_OF_DOCUMENT_TOKEN_TO_BE_REPLACED
Hot PicksView