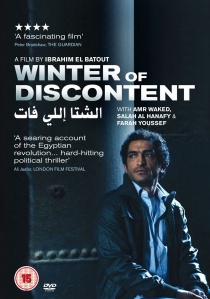 Amr, a computer programmer, had already been a victim of state terror in 2009. Two years later, he hears the news of the demonstrations engulfing Cairo and making their way to Tahrir Square.

Farah is a news anchor on Egyptian television. As events unfold, she soon realizes that the news she is delivering , aimed at minimizing the protests, is very different from what is being reported on-line and internationally. Adel is an officer with Egyptian State Security and the 25th of January becomes a day that he never imagined would come true.

As the stories of these three characters unfold, presaging and intertwining with the pivotal events that changed the face of Egypt and the Arab world, we are propelled headlong into the surreal atmosphere of terror and uncertainty that characterized the last days of Mubarak's rule. Amr, Farah and Adel will all be taken on a journey that is going to change their lives, as well as their country, forever.