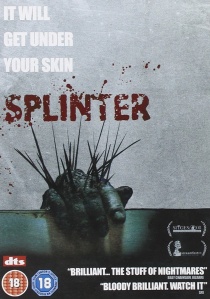 Splinter begins as young couple Seth (Costanzo) and Polly (Wagner) retreat to the wilderness for a romantic camping weekend in Oklahoma. With their tent damaged and on their way to a motel, their idyll is shattered further when they are car-jacked by an escaped convict Dennis Farrell (Whigham) and his drug addict girlfriend Lacey (Kerbs) on the run from police. As the foursome travel the deserted back roads together, keeping one eye on the road whilst each plotting their next move, they find themselves in deeper trouble than any of them could have ever imagined. After hitting an infected roadside animal, the group are confronted by a blood-crazed, parasitic creature that terrifyingly absorbs the corpses of its victims, turning their still-living bodies into deadly hosts.

Finding shelter in an abandoned gas station, they must use their wits and every weapon at their disposal to stave off the onslaught, not only from the insatiable creature, but from each other. Made for Horror fans by horror fans and reminiscent of classic movies Evil Dead, The Thing and Night of the Living Dead, Splinter is an exhilarating ride of jolts and screams, a perfectly shot, awesomely acted throw back to the classic creature features of the early '70s and '80s with a very modern twist.