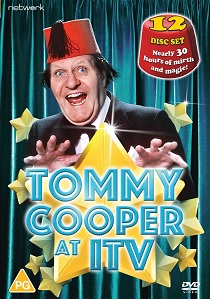 With his uniquely chaotic blend of fluffed magic and lame jokes, Tommy Cooper was a constant and instantly recognisable presence on television for four decades. A firm favourite with the public, his variety shows were always eagerly awaited - Eric Sykes hailed Tommy Cooper as the "funniest man in the world", so it's hardly surprising that it was noted "he only had to walk on stage to cause hysterics"!

Includes the complete collections of:

With 12 discs and nearly 30 hours of mirth and magic, Tommy Cooper at ITV is released on DVD 21st November 2022 from Network.

Related Articles
A Fish Called Wanda, Willow: 25th Anniversary Edition
Absolutely Fabulous: The Movie, Bless This House
A Kind Of Loving
Roobarb and Custard: The Complete Collection, Much Ado about Nothing, Watership Down
And Mother Makes Three: Series 2
Whodunnit: Series 1
The Likes of Sykes
Spooner's Patch: The Complete Series, Father Dear Father
The Wrong Arm of the Law: Vintage Classics, The Railway Children
Slinger's Day: The Complete Series, Morecambe and Wise at ITV
The Tommy Cooper Hour
Father Dear Father
For your consideration

HotDVDTVBoxset
With a familiar mixture of sketch and stand-up, the first successful television format for Morecambe & Wise is released on 14-disc DVD 29th November 2021 from Network. END_OF_DOCUMENT_TOKEN_TO_BE_REPLACED
Comments
Hot Pick

HotUHD
One of the most outrageous and beloved holiday comedies of all time, Steve Martin and John Candy star in director John Hughes' hysterical and heartwarming tale of travel gone awry in Planes, Trains and Automobiles, released on 4K UHD 21st November 2022 from ... END_OF_DOCUMENT_TOKEN_TO_BE_REPLACED
Top PicksView