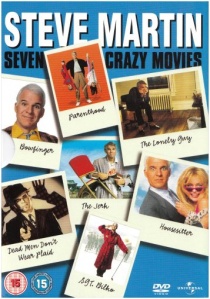 News
News Article Go back to homepage
A real jack of all trades and master of them all, the wacky, zany and much loved talent that is Steve Martin is celebrated in a superb new seven set DVD collection courtesy of Universal Pictures. Released on 12th November 2007, The Steve Martin Collection is perfect for comedy fans.
Unknown
Unknown
12/11/2007
Thank you for supporting DVD365.net when you order using the link(s) below. As an Amazon Associate we earn from qualifying purchases
Buy DVD
Information

He's a brilliant comic, an award winning actor, a hit playwright, a mean banjo player and an Oscar® Awards host. His good looks even landed him on People Magazine's "50 Most Beautiful People" List in 2003! A real jack of all trades and master of them all, the wacky, zany and much loved talent that is Steve Martin is celebrated in a superb new seven set DVD collection courtesy of Universal Pictures. Released on 12th November 2007, The Steve Martin Collection is perfect for comedy fans.

The now legendary comedy, The Jerk, sees Martin give an inspired performance as Navin Johnson, the adopted son of a poor black sharecropper family, whose crazy inventions lead him from rags to riches and right back to rags. En route he encounters a string of misadventures, becomes smitten with a lady motorcycle racer, survives a series of screwball attacks by a deranged killer and becomes a millionaire by inventing the "Opti-grab" handle for eyeglasses.

One of the best ever parodies of the '40s hardboiled detective genre, this ingenious production cleverly weaves the plot around memorable movie clips from such classics as The Big Sleep, Double Indemnity, The Lost Weekend, White Heat and Notorious. Steve Martin plays Rigby Reardon, the private eye of private eyes. He's tough, rough and ready to take on anything when the beautiful Juliet Forrest (Rachel Ward) appears on the scene with a case: her father, a noted scientist, philanthropist and cheese maker, has died mysteriously. Reardon immediately smells a rat and follows a complex maze of clues with a little help from friends including Alan Ladd, Barbara Stanwyck, Ray Milland, Burt Lancaster, Cary Grant, Humphrey Bogart and Charles Laughton, he finally gets his man.

Martin co-stars with Charles Grodin and Tony Award® winner Judith Ivey in a funny and poignant romance inspired by Bruce Jay Friedman's tongue-in-cheek survival manual. The Lonely Guy follows the progress of Larry (Martin), a struggling greetings card writer, who is forced to leave his girlfriend after he finds her in bed with another man. Along with his buddy Warren (Charles Grodin), he attempts to eke out some semblance of a social life in the Big Apple. Unfortunately they're both losers, until one day, in a last ditch attempt to alleviate his despair, Larry writes a book that turns loneliness into the ultimate love potion, and life is never the same again!

Steve Martin pairs up with Goldie Hawn in this delightful, warm-hearted and intelligent comedy about the consequences of "stretching" the truth. When architect Newton Davis (Martin) has his proposal of marriage turned down, his newly built dream house suddenly becomes nothing more than an empty monument to his girlfriend's rejection. That is, until a chance encounter with Gwen (Hawn) turns his life upside-down. Intrigued by Newton's story, flaky con artist Gwen visits the house and decides to move in on her own. Resourceful and creative, she is soon fixing up the place and charming Newton's family and neighbours - all the while passing herself off as his new wife! Gwen even befriends Newton's ex, who begins to see a man she never knew existed. Horrified at the deception yet unable to stop it, Newton finds himself playing along with her preposterous stories, her attempts at reconciling differences within his family and her campaign for his promotion at work.

Steve Martin joins forces with Dan Aykroyd and Phil Hartman in this outrageous comedy. Martin is the conniving, incorrigible and invincible Sgt. Ernie Bilko, leader of a ragtag group of the sorriest soldiers ever to enlist in the armed forces. Bilko must deal with two problems: one is Wally, the prudish, newest member of his squad who does not participate in his wild schemes and the other is Bilko's sworn enemy Major Thorn.

How does Bobby Bowfinger (Steve Martin), Hollywood's least successful director, get Kit Ramsey (Eddie Murphy), Hollywood's biggest star, to star in his ultra low-budget film? Any way he can. Desperate to hit the big time, the hapless dreamer recruits a motley crew of aspiring misfits including Kit's eager and nerdy brother, an ambitious and sexy wannabe (Heather Graham) and an over-the-hill diva (Christine Baranski). With their help, Bowfinger embarks on a radical and ingenious scheme to trick Kit Ramsey into giving the performance of a lifetime.

UHD
An expert cutter must outwit a dangerous group of mobsters in order to survive a fateful night in The Outfit, released 1st August 2022 on DVD, Blu-ray and 4K UHD from Dazzler Media. END_OF_DOCUMENT_TOKEN_TO_BE_REPLACED
Top PicksView