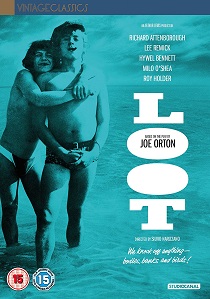 Based on the play by Joe Orton, the farcical comedy Loot is a satirical look at 20th century society with an impressive ensemble cast including Richard Attenborough (The Angry Silence, Brighton Rock), Lee Remick (The Omen, Days of Wine and Roses), Hywel Bennett (The Family Way, Twisted Nerve) and Milo O'Shea (Arabian Adventure, Barbarella).

Dennis (Hywel Bennett) and his lay-about pal Hal (Roy Holder: The Taming of the Shrew) chance a robbery of the local bank. With nowhere to hide the loot, their only option is to conceal it inside Dennis's recently deceased mother's coffin. Once the money is concealed, they move the casket to the hotel belonging to Dennis's father (Milo O'Shea) under the duplicitous eye of scheming Irish nurse Fay (Lee Remick).

All seems well until inept Inspector Truscott (Richard Attenborough) arrives at the hotel to investigate the crime. Before long the hotel becomes the epicentre of a hilarious farce as the motley crew move the casket back and forth to avoid detection by the incompetent Inspector.

Loot is re-released on DVD and Blu-ray 28th August 2017 from StudioCanal.