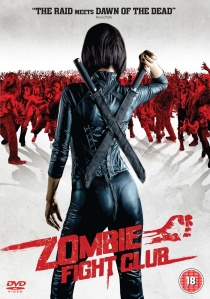 Directed by Joe Chien, The Raid meets Dawn of the Dead in the crazy zombie smackdown Zombie Fight Club, released on DVD on 31st August 2015 courtesy of Altitude Film Distribution.

While the zombie apocalypse brings Taipei to the brink of collapse, an apartment block in the corner of the city becomes riddled with crime. But things go from bad to worse when it's overrun by zombies; infecting the residents, bystanders and even a SWAT team sent in to help.

Surrounded by zombies and with no way out but down, the last remaining survivors Andy (Andy On; The Demon Within, Once Upon A Time In Shanghai) and Jenny (Jessica C; Double Trouble, Beach Spike) soon find themselves trapped in an underground arena of the undead. With nothing left to do but fight, can they battle their way through the hordes of zombies and escape the apocalypse?

Once again, Joe Chien (Zombie 108, Apostles) sets out to have as much fun as he possibly can with the fan favourite monsters, adding a new dimension to zombie-style action. The result is a high-octane spectacle, and with young exciting leads Andy On and Jessica C, it's also one of the sexiest entries into the zombie genre.

With fights choreographed by Philip Ng, the action really is the centerpiece of the film, and once the Zombie Fight Club kicks-off you won't be disappointed - it's a fight to the death like you've never seen before.

BD
From the acclaimed director of fan-favourites such as Baby Driver, Shaun of the Dead and The World's End comes the tribute to 1960s London in Last Night In Soho, available to own on DVD, Blu-ray and 4K UHD 31st January 2022 ... END_OF_DOCUMENT_TOKEN_TO_BE_REPLACED
Top PicksView