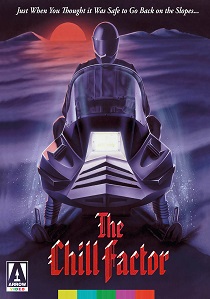 The Exorcist meets the Winter Olympics in this tale of demonic possession and snowbound slashing from director Christopher Webster, producer of Hellraiser and Hellraiser II: Hellbound.

For a group of young couples, a snowmobiling trip turns into a waking nightmare when one of their number is thrown from their vehicle and knocked unconscious. Seeking refuge in a nearby abandoned summer camp, the group find themselves holed up in a cabin filled with bizarre and ominous religious artefacts. As night falls, the discovery of a Ouija board amidst the dusty relics awakens a terrifying evil.

Barely released outside of its original VHS outing (for which it was retitled Demon Possessed), cult enthusiasts Arrow Video have dug up The Chill Factor from its wintry analogue grave so horror fans can rediscover this heady mixture of snow, slaughter and Satan!

With a brand new 2K restoration from original film elements, The Chill Factor is released on Blu-ray 15th July 2019 from Arrow Films.