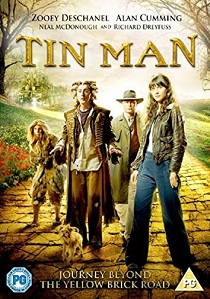 The once-beautiful 'Outer Zone' has become a decaying wasteland and its subjects imprisoned under the control of the evil Azkadellia. While the witch hatches a nefarious plot to suck the souls out of her minions, it seems only one person can stop her...

Encountering hordes of winged monkey-bats, a shape-shifting dog and a cyber-punk sorceress: the Emmy Award-winning Tin Man doesn't just go over the rainbow, it goes way beyond.

HotDVDBDUHD
The saga of Michael Myers and Laurie Strode continues in the next thrilling chapter of the Halloween series as Halloween Kills arrives on DVD, Blu-ray and 4K UHD 17th January 2022 from Universal Pictures (UK). END_OF_DOCUMENT_TOKEN_TO_BE_REPLACED
Top PicksView