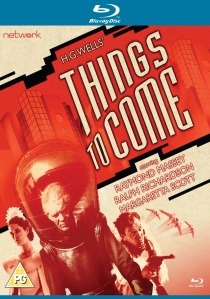 A future history as scripted by the visionary writer H.G. Wells, Things To Come, released on Blu-ray for the first time by Network on 18th June 2012, set a high benchmark for science fiction with its fantastic design, gigantic sets and spectacular special effects.

Acknowledged as a landmark within the genre, Oscar-winning William Cameron Menzies creates an astounding vision of post-war desolation and utopian futurism. Starring Oscar-nominated Raymond Massey as John Cabal and his descendants and the award-winning Ralph Richardson as The Boss, Things To Come showcases a gorgeous and instantly recognisable, score by Arthur Bliss. Presented for the first time in High Definition, this version of Things To Come has been painstakingly restored from the remaining film elements and represents the most complete version known to exist.

It's Christmas 1940 and the people of Everytown, unprepared and ill-equipped, find themselves at war against an enemy who has been planning such a conflict for years. The land is devastated by the horrors of aerial bombardment as the war drags on for thirty years, causing a period of despair, with feudal tyrants ruling a downtrodden populace suffering famine and pestilence. Can the human race rise above its desperate circumstances and build a scientific utopia?

Related Articles
The Proud Valley, It Always Rains On Sunday: Remastered
The Sound Barrier, Outcast Of The Islands: 50th Anniversary Edition, Time to Remember, The Heiress: The Criterion Collection, Morecambe and Wise at ITV, Watership Down
The Winslow Boy, The Winslow Boy
The Woman In The Window: Masters of Cinema
Comments
Hot Pick