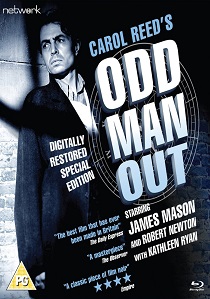 James Mason is Johnny McQueen, the idealistic leader of an illegal organisation in Northern Ireland. Shot during an armed raid he is badly wounded. Stumbling through the back streets of Belfast his friends, enemies and the police begin to close in as he tries to find a place to hide...

Outstandingly directed by the Oscar-winning Carol Reed, Odd Man Out, released on Blu-ray for the first time by Network on 18th June 2012, stars James Mason as a terrorist on the run in post-war Belfast. Giving what is undeniably his finest performance, Mason gets exemplary support from both Robert Newton, a crazed artist who desires to paint the death in McQueen's eyes and Kathleen Ryan as the woman who loves him more than life itself. This High Definition digital restoration showcases the film's stark and beautiful imagery, ably complemented by the its exceptional score, which continually drives the story forward to its shocking conclusion.

Related Articles
Journey To The Center Of The Earth: Eureka Classics, The Man Between, Frankenstein: The True Story, Murder By Decree, Screen Icons: James Mason, The Verdict, Murder By Decree
The Day Of The Jackal
The Man Between, The Third Man, Outcast Of The Islands: 50th Anniversary Edition, Oliver! Special Edition, Mutiny On The Bounty
Doctor Who: Earth Story, Will Any Gentleman..?, Doctor Who: Galaxy 4
Laughter In Paradise
Comments
DVD Releases News Pick