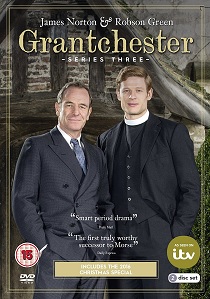 Television's dishiest vicar Sidney Chambers (James Norton - Happy Valley) returns for a third series of hit period crime drama Grantchester. Following its broadcast on ITV1 it will be released on DVD alongside the Grantchester 1 - 3 Complete Box Set, thanks to Acorn Media International.

The year is 1955 and the seemingly bucolic town of Grantchester is rife with crimes of passion and murderous plots. Luckily the local crimePsolving duo of amateur sleuthing vicar Sidney Chambers alongside his good friend Detective Inspector Geordie Keating, played by TV favourite Robson Green (Soldier Soldier), are on the case. Grantchester: Series Three arrives on DVD 12th June 2017 in a two-disc set and includes the 2016 Christmas Special, the complete box set will be released on the same date.

When dead birds start mysteriously appearing in the vicarage, followed by more feathery corpses at two separate crime scenes, Sidney is worried that someone is targeting him because of his secret romance with widow Amanda (Morven Christie - The Replacement). As cases of racial tension and factory cover-ups come to a head with the disappearance of a local child, there seems to be a dark underbelly emerging in the village.

Increasingly finding solace in his relationship with Amanda, Sidney's faith is being seriously tested, to the dismay of his doting housekeeper Mrs Maguire (Tessa Peake Jones - Only Fools and Horses) and fellow curate Leonard (Al Weaver - Southcliffe), who are struggling with their own crises. Caught between two lives, which will he choose?

Filmed in the picturesque village of Grantchester nestled in the beautiful Cambridgeshire countryside, this detective series is quintessentially British viewing. Escape to the world of Grantchester this summer.

UHD
Mega-action hero Liam Neeson stars as a father in search of answers after his son is mysteriously murdered in Cold Pursuit, arriving on 4K UHD, Blu-ray and DVD 24th June 2019 from StudioCanal. END_OF_DOCUMENT_TOKEN_TO_BE_REPLACED
Hot PicksView