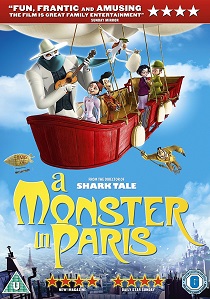 NewsAnimationMusic
News Article Go back to homepage
Be prepared to get acquainted with a tuneful talent of monstrous proportions this summer as Franc the musical flea wins hearts and minds in A Monster In Paris, arriving on Blu-ray Family Pack and DVD from 4th June 2012, courtesy of Entertainment One.
Julie Ferrier, Ludivine Sagnier, François Cluzet, Gad Elmaleh, Vanessa Paradis, Matthieu Chedid
Bibo Bergeron
Andre Clavel, Rémi Burah, Olivier Bizet, Luc Besson
Entertainment One
1 hour 30 minutes
04/06/2012
Thank you for supporting DVD365.net when you order using the link(s) below. As an Amazon Associate we earn from qualifying purchases
Buy DVD
Buy BD
Information

Be prepared to get acquainted with a tuneful talent of monstrous proportions this summer as Franc the musical flea wins hearts and minds in A Monster In Paris, arriving on Blu-ray Family Pack and DVD from 4th June 2012, courtesy of Entertainment One.

A wacky inventor, his camera-crazy best friend and a madcap monkey make a massive mistake when let loose in a mad scientist's laboratory. With lotions and potions spilling everywhere, the troublesome trio accidentally creates Franc, the product of a reaction between a common flea and one of the scientist's mystery concoctions. What they fail to realise, however, is that this 'monster' is actually a soft-centered soul with a spooky talent for music.

With the help of a feisty nightclub singer, Franc becomes the talk of the town, just as stories of Paris's newest monster attract the attention of the egotistical police commissioner, hell bent on securing a big prize to help his battle to become mayor. The unwitting scientists and the singer must team up to protect Franc, a monster with more than a musical career to protect!

Produced by the legendary Luc Besson (The Fifth Element, Arthur And The Invisibles) and from the director of the multi-million selling Shark Tale and The Road To El Dorado, A Monster In Paris features the voice talents of French singing sensation Vanessa Paradis, as well as Sean Lennon, Danny Huston (X-Men Origins: Wolverine, Wrath Of The Titans) and Adam Goldberg (TV's Joey, A Beautiful Mind). One of the most original, charming and fun-packed animated films of the year, A Monster In Paris also features beautiful, original animation and a vibrant story packed with memorable characters that the whole family will adore!

What's more, the brilliant value Blu-ray Family Pack includes 3D Blu-ray, Blu-ray and DVD versions of the film, catering for all your entertainment needs in one handy package. And with fun-packed extras including 'Charles' Challenge' and a 'Meet The Characters' featurette, there's even more to keep you occupied!

UHD
One of the most compelling and conflicted characters in Sony Pictures Universe of Marvel Characters comes to the big screen as Jared Leto transforms into the antihero Michael Morbius as Morbius is released on 4K Ultra HD, Blu ... END_OF_DOCUMENT_TOKEN_TO_BE_REPLACED
Top PicksView