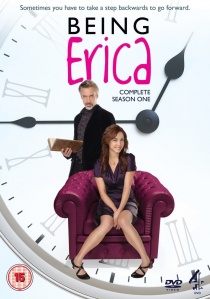 The first series of Canada's smash hit award-winning comedy series, Being Erica, is available to own for the first time on DVD on 28th June 2010 from 4DVD. Being Erica is a thirteen part series now currently being shown on E4 that explores the life of Erica Strange, a woman who has been given a wonderful gift.

Back in high school, Erica thought she'd grow up, meet 'the' guy, get 'the' career, have a couple of beautiful, talented children and ride off into the sunset. But somehow, it never happened. After a series of mishaps, Erica meets the mysterious Dr Tom - a therapist who seems to know a lot about her. Dr Tom gives her the chance of a lifetime...In each episode, Erica goes back to relive a regret from her past, in order to come back and make a positive change in her present.

We follow Erica through several scenarios such as her being torn between following her career dreams to work in a literary field and settling for the secure option at her uncle's bridal factory. Her trip back to University when she was approached by the esteemed secret society Literati also teaches her the value of following her heart.

When Erica brings her best friend Ethan to her high school reunion to pose as her pretend boyfriend, she must relive her first sexual experience in Muskoka to understand and overcome the source of her relationship troubles. In order to conquer her fear of confrontation, Erica is sent back to her first semester of University to finally stand up for herself against the daunting Professor Lozar.

By making different choices, can she alter her past and transform her present? Funny, tragic and uplifting in equal parts, this is a drama about the ways we hold ourselves back from following our dreams.