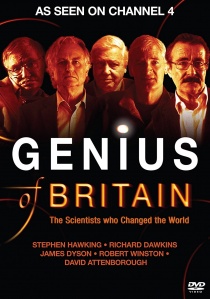 The new five-part Channel 4 science series, The Genius of Britain, is available to own for the first time on DVD from 7th June 2010 from 4DVD. From the steam engine, evolution, the atom, the computer and the World Wide Web - British science has quite literally changed the modern world. Some of Britain's leading scientific names - Stephen Hawking, Richard Dawkins, James Dyson, David Attenborough, Robert Winston, Paul Nurse, Jim Al-Khalili, Kathy Sykes and Olivia Judson - will be telling the stories of the people behind these innovations.

These are stories of obsession, of people prepared to inject themselves with syphilis, drink poison, blow themselves up and undertake suicidal voyages - all in the name of discovery. From Isaac Newton to Frank Whittle, James Watt to Isambard Kingdom Brunel, and Joseph Banks to Rosalind Franklin, these are the men and women who - through blood, sweat and tears - overcame obstacles to discover the truth.

The tales range from accounts of pure genius: when the apple fell and the secrets of the universe were unlocked: to dark tales of obsession, deception and even bodysnatching. There are stories of perilous voyages across vast oceans, and the ruthless competition to solve the mystery - and grab the glory - first. Each story has a 'Eureka!' moment, when everything becomes clear.

The presenters revisit the awe-inspiring inventions and fantastical designs from British history: from Hooke's giant telescope, to James Watt's steam engine to Brunel's awe-inspiring Great Eastern and Rosalind Franklin's breakthrough X-ray. The series reveals the genius of an engine run on water; the sublime beauty of gravity; and the threat of dark matter. But at the heart of this series are the human stories behind the inventions, gadgets and remarkable scientific truths that we now take for granted. Microscopes, telescopes, laughing gas, mould, sub-atomic particles, the World Wide Web and cyber brains. These are just some of the discoveries that were made by some truly incredible British people.

HotUHD
StudioCanal is thrilled to announce that the iconic cult classic, Highlander, is being released to own on 4K UHD for the very first time 31st October 2022 with brand-new artwork from celebrated artist Matt Ferguson. END_OF_DOCUMENT_TOKEN_TO_BE_REPLACED
Top PicksView