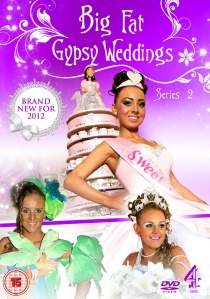 News
News Article Go back to homepage
Channel 4's Gypsies and travellers are back bigger, brighter and 'bling-ier' than ever before! Featuring more false eyelashes, fake tans, flamboyant dresses and towering cakes, Big Fat Gypsy Weddings: Series 2 is available to own on DVD on 7th May 2012 from 4DVD.
Daniel Fromm, Lucy Wilcox, Sam Emmery, Jenny Popplewell
Victoria Hamburger, Sam Emmery, Jes Wilkins, Jenny Popplewell
4DVD
Unknown
07/05/2012
Thank you for supporting DVD365.net when you order using the link(s) below. As an Amazon Associate we earn from qualifying purchases
Buy DVD
Information

Channel 4's Gypsies and travellers are back bigger, brighter and 'bling-ier' than ever before! Featuring more false eyelashes, fake tans, flamboyant dresses and towering cakes, Big Fat Gypsy Weddings: Series 2 is available to own on DVD on 7th May 2012 from 4DVD.

This new series digs deeper into the extraordinary and fascinating lives of the community, focusing on the rites of passage celebrations and events; holy communions, sweet sixteens and of course weddings, as well as answering some of the more probing questions raised by the first series.

In this DVD release, follow an array of colourful new characters as they prepare for significant gypsy occasions and relay their different attitudes toward a range of issues including education, gender roles, traditions and beliefs. Meet Romany Gypsy Alice, who left school at 12 to work for her dad, while best friend Angel bucked the trend and continued with school; Irish Traveller Rosanne, known as the runaway bride; Mikey the openly gay traveller as well as many more.

Charismatic Liverpuddlian wedding dress-maker Thelma also makes a return, creating even more intricate and elaborate outfits. Also get the chance to catch up with now pregnant Sam, the non traveller from the first series who leaped into the traveller's culture by marrying English Gypsy Pat.

From the outrageous tans, highly-structured hairstyles and dresses, to road horse racing, Big Fat Gypsy Weddings 2 tells the intimate stories of this much-misunderstood community. Moreover, fans of the show will also have the chance to re-live Channel 4's highest rated documentary from the beginning with Big Fat Gypsy Weddings series 1 & 2 Boxset also out to own on the same day.