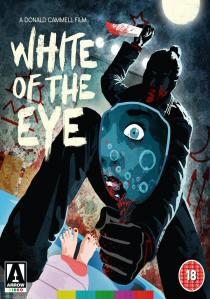 Arrow Video is excited to announce the UK Dual Format Blu-ray and DVD and Steelbook release of the 1987 British thriller, White of the Eye, which will be making its worldwide Blu-ray debut and UK DVD debut from 31st March 2014. Described by the distinguished critic David Thomson as "one of the great secret works in cinema", White of the Eye is one of the most bizarre and unforgettable thrillers ever made.

Following on from their work on Zombie Flesh Eaters, Time Bandits, The Fury and Cinema Paradiso, White of the Eye joins a prestigious line of Arrow Video titles whereby the restoration has been taken directly from the original camera negative, all of which were created by James White at Deluxe. The release will represent the first time the film will be released on Blu-ray in the UK, features packaging that showcases a newly commissioned artwork by Nathanael Marsh.

Arrow Video's Francesco Simeoni said: "Donald Cammell was such an unfortunate filmmaker, side-lined by critics who thought Nicolas Roeg was the creative force behind Performance, projects which would never come to fruition, studio interference and personal problems, his life was arguably more famous than his films. White of the Eye is possibly his most problem free film, though even this film suffered cuts, which we have included, although sadly no sound could be found. Though the film was cut, Cammell never commented, at least publicly, about his dissatisfaction with this decision by distributor Cannon.

With a gorgeous new restoration of the negative and a bevy of supplements including a documentary on Cammell by Oscar winning filmmaker Kevin Macdonald and Chris Rodley, an audio commentary by Cammell's biographer Sam Umland, Cammell's short film The Argument, a comprehensive booklet and more, we are very proud to make this sensational film available to the UK once again".

A serial killer is on the loose in and around the small community of Globe, Arizona and housewife Joan White (Cathy Moriarty) gradually comes to suspect that her opera-loving hi-fi engineer husband Paul (David Keith) might know more than he's letting on.

So far so familiar, but in the hands of British visionary Donald Cammell (who wrote and co-directed Performance with Nicolas Roeg), the film becomes a dazzling kaleidoscope of images and ideas, spanning everything from Apache folklore, desert landscapes and stylish murder set-pieces that recall Dario Argento to a painfully vivid dissection of the emotional fissures undermining a modern marriage. It's all set to an equally eclectic score co-written by Pink Floyd's Nick Mason.

HotDVDBDUHD
An action thriller unlike any other, a young getaway driver relies on the beat of his personal soundtrack to be the best in the game in Baby Driver, the newest explosion of genre-crossing excitement from writer-director Edgar Wright, released on 4K Ultra HD, Blu-ray and DVD ... END_OF_DOCUMENT_TOKEN_TO_BE_REPLACED
Top PicksView