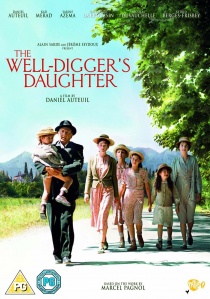 One of France's most iconic stars makes his directorial debut with the beautiful The Well Digger's Daughter, available on DVD from 20th February 2012, courtesy of Pathe Distribution Ltd.

Based on Marcel Pagnol's classic film of the same name, The Well Digger's Daughter sees one of France's favourite sons, Daniel Auteuil (Hidden, 36), direct and star in a beautiful and timeless tale of love, loss and regret.

In pre-war France, Patricia (Astrid Bergès-Frisbey, Pirates of the Caribbean: On Stranger Tides) meets Jacques (Nicolas Duvauchelle) on her way to deliver her father his lunch. With that meeting, a love affair commences that is cut short when Jacques is sent to the front line. When Patricia unexpectedly finds herself pregnant, Jacques' wealthy parents accuse her of blackmail leaving Patricia and her father (Auteuill), the local well digger, to care for the child. However, when Jacques is declared missing in action, his family seeks solace in their only link to their son....

Echoing the beauty and charm of Auteuil's own early films such as Jean De Florette, The Well Digger's Daughter is the directorial debut of one of French cinema's true powerhouses and a must-see for Francophiles everywhere.