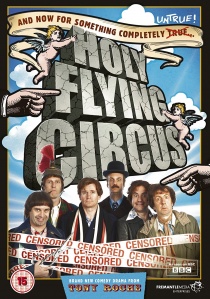 In 1979, Monty Python's "Life Of Brian" became one of the most controversial films ever to be released in British cinemas, causing outrage amongst religious groups, members of the public and politicians, most of whom hadn't even seen the film. Accusing it of being blasphemous, many called for the film to be banned.

Now, the brand-new, critically acclaimed comedy-drama Holy Flying Circus revisits that period and delivers a witty, entertaining and affectionate homage to the Pythons and the film that, today, has become accepted as one of the greatest comedy movies of all time. Garnering Five Star reviews in Heat and TV Times ("Anarchic and witty with post-modern flourishes that the Pythons themselves would be proud of") and Four Star reviews in the Daily Express and the Daily Mail (which praised it for being "batty and exceptionally well made"), it was hailed by the Sunday Telegraph for being "cheeky, fantastical... [and] very funny", acclaimed as "a triumph" by The Sunday Times and considered "one of the most insanely creative, joyous, electric, ridiculous, heartfelt, ballsy and unique dramas I have ever seen" by Caitlin Moran on The Saturday Times.

As the controversy surrounding the cinema release of "Life Of Brian" raged around them, the Pythons found themselves not only fighting a war against censorship but also at the centre of a debate about what is an acceptable subject matter for comedy. In an attempt to put their side of the argument to the public and to defend the film against the charges of blasphemy, Michael Palin and John Cleese agreed to take part in a live debate on a Tim Rice-hosted edition of the television chat show, "Friday Night, Saturday Morning". Arguing the case against the Pythons were two prominent society figures of the time, journalist and author Malcolm Muggeridge and Mervyn Stockwood, the then Bishop of Southwark. What transpired that night has become the stuff of TV legend and was famously regarded by author Douglas Adams (The Hitchhiker's Guide To The Galaxy) as his "favourite bit of television".

Holy Flying Circus, released on DVD by FremantleMedia Enterprises on 6th February 2012, presents a fantastical, Pythonesque re-imagining of the events leading up to and including the riveting TV debate and the eventual release of "Life Of Brian" in British cinemas. A brilliant and very funny work on its own merits, it is a must-see for Monty Python fans and all those with an interest in the vagaries of comedy.

BD
Adapted from the classic novel by Charles Dickens, The Personal History Of David Copperfield, released on DVD and Blu-ray 15th June 2020 from Lionsgate Home Entertainment, brings to life one of the ... END_OF_DOCUMENT_TOKEN_TO_BE_REPLACED
Hot PicksView