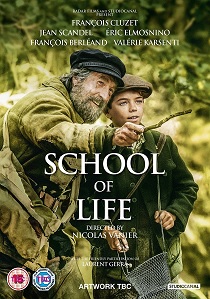 The School of Life, released on DVD 18th December 2017 from StudioCanal is a French drama co-written and directed by Nicolas Vanier.

Trapped behind the high walls of an austere orphanage in suburban Paris, Paul (Jean Scandel) has only ever known one home. His chance to discover the great wide world comes when a bohemian couple, Célestine (Valérie Karsenti) and Borel (Eric Elmosnino), take him back to their countryside home on a vast estate in Sologne, where Borel is the gamekeeper.

Paul starts to explore his new home among the huge forests, misty ponds and fields, which all belong to the taciturn loner, Count de la Fresnaye, who Paul soon discovers has a fractious relationship with Borel due to the Count's toleration of poachers on his estate. Borel relentlessly hunts down these welcome trespassers, particularly Totoche (François Cluzet), the most wily and elusive among them, who has befriended Paul unbeknownst to his adoptive parents.

In the heart of Sologne, Paul will learn about the forest, its mysteries and the complexities of life alongside Totoche, but a heavier secret weighs down the estate as Paul's arrival seems to be no accident.

HotDVDBD
An impending apocalypse raises the stakes and shatters the boundaries of time and space in Marvel's Agents of S.H.I.E.L.D. - The Complete Fifth Season, arriving on DVD and Blu-ray 1st October 2018 from Walt Disney Home Entertainment. END_OF_DOCUMENT_TOKEN_TO_BE_REPLACED
Top PicksView