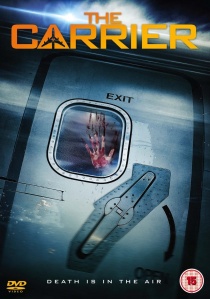 News
News Article Go back to homepage
What would you do to survive when anyone could be a carrier? With civilisation on the brink of extinction, there's only one way to ensure survival and that's kill or be killed in The Carrier, released on DVD by Altitude Film Entertainment on 25th January 2016.
Jack Gordon, Karen Bryson, Edmund Kingsley
Anthony Woodley
Altitude Film Entertainment
1 hour 30 minutes
25/01/2016
#TheCarrier
Thank you for supporting DVD365.net when you order using the link(s) below. As an Amazon Associate we earn from qualifying purchases
Buy DVD
Information

When a devastating infection spreads across the entire world, causing chaos and collapsing civilisation as we know it, the only safe place is in the air.

A cabin crew escapes on a damaged 747 bound for Greenland but not all the passengers are as healthy as they seem... When the plane is sabotaged, the ragtag group of survivors are forced to land in an England tearing itself apart and ravaged by disease. The crew are faced with impossible life or death decisions which force them to confront their past, face their fears and fight for their very survival.

Shot through with an uncomfortably intimate tension, The Carrier mixes classic elements of the best apocalyptic movies with its own unique flourishes to create a film that feels both reminiscent of the masters of the genre and fresh enough to be consider a roaring in its own right.

The Carrier is released on DVD by Altitude Film Entertainment on 25th January 2016.