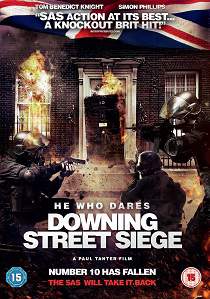 Directed by Paul Tanter (Essex Boys: Retribution) and starring Simon Phillips (The Rise & Fall Of A White Collar Hooligan) and Tom Benedict Knight (Dracula Untold), He Who Dares: The Downing St Siege is released on DVD by Metrodome on 5th January 2015.

Six months after the SAS recused the Prime Ministers daughter from a ruthless terrorist gang, the UK's number one criminal, Alexander Holt escapes custody and steps up his plans to storm the very heart of Government: 10 Downing Street. Meanwhile, SAS Captain Chris Lowe, who led the rescue, is facing an inquiry for the actions of his team on the day.

Taking advantage of political protest in the capital stretching the security services to breaking point, Holt and his team infiltrate the UK's most secure building in spectacular fashion, blowing the famous number ten door from its hinges and take the Prime Minister hostage inside the bunker underneath Downing Street. With the Security Service Officers all dead, Chris is the only man on the inside who can rescue the Prime Minister and the other hostages.

As the media frenzy over the attack builds, the Deputy Prime Minister convenes COBRA to take charge of the crisis. With a gun to the Prime Ministers head, the Government is unable to send in troops for fear of risking his life and is unsure if Lowe is fighting for or against the terrorists. With no support from the outside world, Chris navigates the corridors of power and labrynthian bunker below, freeing hostages and taking down Holt's crew until it's just the two old adversaries left in a final face off.