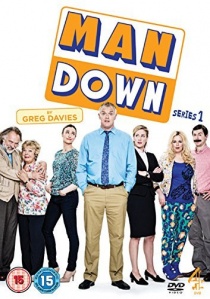 Greg Davies, acclaimed stand-up comedian, Mr Gilbert in the hit TV series and film The Inbetweeners, and BAFTA-nominated star of Cuckoo, writes and stars in Man Down, released on DVD on 17th November 2014 courtesy of Channel 4 DVD.

Dan's world is at near collapse, his girlfriend Naomi (Deidre Mullins) is fast running out of patience with his inability to navigate the simplest of life tasks, while his best friends are Jo (Rosin Conaty) who has, what can only be described as, the loosest of grasp on reality and Brian (Mike Wozniak), a straight-laced financial adviser who is regularly dumbfounded by the complete idiocy of his two friends.

To compound matters Dan's listless teaching career sees him begrudgingly teach a version of the same lesson every day, inexplicably popular with all but one of the pupils, with his only highlight coming in the form of Miss Lipsey (Jeany Spark), a head mistress who views Dan with a mixture of pity and despair. Tormented daily by his father (Rik Mayall) whose driving motivation in life seems to be to ensure his son is humiliated at every turn, not to mention regularly physically attacked, does so while keeping it almost completely under the radar of his wife and Dan's mum (Gwyneth Powell).

UHD
Disney and Pixar's original feature film Luca, released on DVD, Blu-ray and 4K UHD on 23rd August 2021, is a fun and heartwarming story about friendship, stepping out of your comfort zone and two ... END_OF_DOCUMENT_TOKEN_TO_BE_REPLACED
Top PicksView