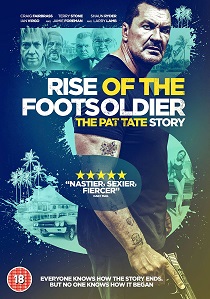 The rise of ruthless Essex gangster Pat Tate, who blazes a path from Marbella to the Medway in the late 80s, peddling pills and snorting coke and crushing anyone who gets in his way, in his quest for cash and power. Double-crossed by an ex-pat drug baron, Tate ends up in prison. Undeterred, he establishes himself as top dog inside and gets himself in shape in preparation for his release - when he plans to reclaim his turf the only way he knows how - with violence and no mercy.

On the 10th anniversary of the release of the smash hit gangster classic Rise Of The Footsoldier comes this no-holds-barred prequel, telling the tale of real life Essex Boy Pat Tate, a man mountain with a hair-trigger temper, a serious fondness for pills and cocaine, and an unquenchable hunger for power. The Scarface of Southend is a role Craig Fairbrass was born to play, and he grips the role between his teeth and does not let go. It's a towering performance that cements Fairbrass's reputation as a screen hard man of the top rank.

The rest of the cast is a veritable who's who of the creme de la creme of Brit gangster film talent, with the likes of Terry Stone (Bonded By Blood), Eddie Webber (The Firm), Larry Lamb (The Hatton Garden Job), Jamie Foreman (Layer Cake), Josh Myers (Bonded By Blood 2), Roland Mannokian (The Business) and Billy Murray (Essex Boys) shoving their lovely mugs onto the screen. There are also appearances from Big Brother sensation and bareknuckle fighter Paddy Doherty in his acting debut, and legendary Happy Mondays frontman Shaun Ryder as a nasty piece of work called Mad Dog.

Rise Of The Footsoldier 3: The Pat Tate Story is released on DVD and Blu-ray 26th December 2017 from Signature Entertainment.