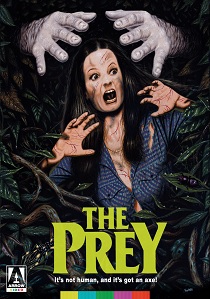 NewsHorrorThrillerArrow
News Article Go back to homepage
One of the most underrated efforts to hail from the slice-and-dice boom, The Prey, released on Blu-ray 16th September 2019 from Arrow Video, at last emerges from the VHS wilderness in a brand new 2K restoration from the recently unearthed original camera negative.
Debbie Thureson, Steve Bond, Lori Lethin
Edwin Brown
Summer Brown
Arrow Video
1 hour 20 minutes
16/09/2019
#ThePrey
Thank you for supporting DVD365.net when you order using the link(s) below. As an Amazon Associate we earn from qualifying purchases
Buy BD
Information

It's not human, and it's got an axe! One of the most underrated efforts to hail from the slice-and-dice boom, The Prey, released on Blu-ray 16th September 2019 from Arrow Video, at last emerges from the VHS wilderness in a brand new 2K restoration from the recently unearthed original camera negative.

Three young couples set off into the mountains for a weekend of climbing, drinking and lovemaking. But little do they know that they are stumbling into the terrain of a fearsome predator - a wild man, horrifically burned as a child many years ago in a fire which engulfed his gypsy camp and left only him alive. Now he roams the woods in search of his next human prey.

Filmed in 1979-1980 - making it a contemporary, rather than an imitator, of the likes of Friday the 13th - but not released until 1984 when it was picked up by New World Pictures, The Prey is a unique woodsy slasher gem ripe for reappraisal in this extras-packed, 40th Anniversary edition!

HotBD
Combining the bio-horror elements of his earlier films whilst anticipating the technological themes of his later work, Videodrome, released on Blu-ray from a restored high-definition digital transfer by Arrow Films on 7th December 2015, exemplifies Cronenberg's extraordinary ... END_OF_DOCUMENT_TOKEN_TO_BE_REPLACED
Top PicksView