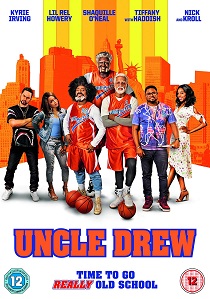 An all-star cast drives to the hoop in the hilarious basketball comedy Uncle Drew, arriving 5th November 2018 on Blu-ray and DVD from Lionsgate Home Entertainment. Based on the hit Pepsi web series, the film tells the raucous tale of a young team owner and Uncle Drew rounding up Drew's old basketball squad to prove that a group of septuagenarians can still win the big one.

After Dax (Lil Rel Howery) loses his street ball team to his archrival (Nick Kroll), he's desperate for a way to enter the upcoming tournament and win the cash prize. Dax stumbles upon the man, the myth, the legend Uncle Drew (NBA All-Star Kyrie Irving), and draws up a crazy game plan: convince Drew and his old squad (Shaquille O'Neal, Chris Webber, Reggie Miller, Nate Robinson, and Lisa Leslie) to hit the court one more time and prove that septuagenarians can still win the big one!