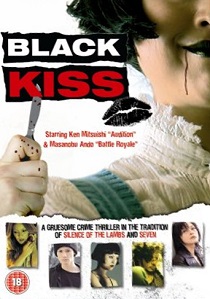 Asuka (Reika Hashimoto) is an aspiring fashion model, recently arrived in Tokyo to pursue her career. Low on cash and job offers, and with nowhere to live, she shacks up in the heart of the city's red light district with newfound acquaintance and former model, Kasumi (Kaori Kawamura), a sullen young woman with a tragic past.

Alone in the apartment one night, Asuka witnesses a bizarre and gruesome murder taking place in the building across the street. The police arrive to find the victim flayed and disemboweled, with voodoo symbols carved into what is left of his skin and his remains displayed as a hideous work of art. Baffled by the seemingly ritualistic killing, the lack of evidence and the fact that the room was locked from the inside, the investigators begin to pursue the voodoo angle.

But similar and strangely 'coincidental' murders soon begin to stack up; all marked by what becomes known as the killer's calling card - a black lip print left on each corpse. And the similarities don't end there. Each victim is found to have had a previous connection to Kasumi and now it looks like Asuka could be next in line to receive the deadly caress of the Black Kiss.

Visually reminiscent of a Dario Argento-style 'giallo' film, Tezka Macoto's stylish shocker also revels in displaying its other cinematic influences, not only be referencing the aforementioned Hitchcock, but also by paying gory homage to the likes Seven and The Silence Of The Lambs.