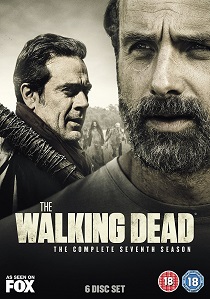 The dead aren't the only things to fear when The Walking Dead: The Complete Seventh Season arrives on Blu-ray and DVD 25th September 2017 from Entertainment One.

Picking up immediately after the thrilling cliff-hanger, Negan forces Rick and the group to fall under his will, brutally convincing them to live by his rules. To prevent further bloodshed, Rick genuinely believes they can make life under Negan, however terrible, work. But he soon learns that Negan can't be reasoned with, and they must prepare to go to war now. Victory will require more than Alexandria, and Rick will need to convince their new allies from the Kingdom and Hilltop to band together with the common goal of taking down Negan and his army.

The five-disc home entertainment release of The Walking Dead: The Complete Seventh Season features hours of never-before-seen bonus features including audio commentaries, deleted and alternate scenes, and nine featurettes looking behind the scenes of the show, delving deeper into the characters and checking in with The Walking Dead writers.