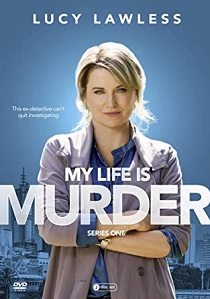 Award-winning actor Lucy Lawless takes the lead in one of Australia's most popular crime dramas: My Life is Murder. Now the first series of this entertaining show is set for its UK DVD release from Acorn Media International following its run on UKTV's Drama.

Lucy Lawless (Xena: Warrior Princess, Parks and Recreation) is retired cop Alexa Crowe, but her ex-boss (Bernard Curry - Once Upon a Time) is persistently on her case to help with cold cases and rookie police data-analyst (Ebony Vagulans) is hassling Alexa to be her mentor... so her detective days may not be over just yet.

When she's asked to investigate the case of a woman who had fallen from the 19th floor apartment of a male escort called Dylan Giroux, she's desperate to know did she fall, or was she pushed? It doesn't take long for Alexa to be back in the game, putting her crime-solving nous to good use as an intrepid private investigator.

Tenacious and unapologetic, Alexa brings her dry wit and brash style as she contends with a suspicious death at a competitive culinary school, a murder in an exclusive cycling club, a locked-room mystery, and more. Also starring Danielle Cormack (Xena), Mavournee Hazel (Neighbours) and Alin Sumarwata (Home and Away), this show is a must watch for amateur sleuths with a taste for the Antipodean.

Recently renewed for a second series which gets its UK premiere on Acorn TV UK this Autumn, it's the perfect time to catch-up with the gripping My Life is Murder: Series One on DVD from 16th August 2021.

BD
The world's most lethal odd couple - bodyguard Michael Bryce and hitman Darius Kincaid - are back on another life-threatening mission as The Hitman's Wife's Bodyguard arrives on DVD, Blu-ray and 4K ... END_OF_DOCUMENT_TOKEN_TO_BE_REPLACED
Top PicksView