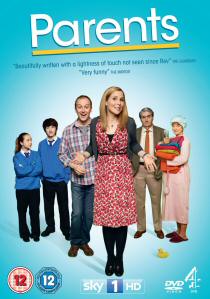 Make room for a whip-smart family comedy centred on those complicated creatures called Parents, out to own on DVD from 29th July 2013, courtesy of Channel 4 DVD.

Flying the nest is a milestone moment, a mixture of nerves and delight as you free yourself from the parental wing and take off to the big wide world without looking back. That's the idea anyway. But what if unforeseen circumstances force you to return and shack up with mum and dad once again?

Until recently, Jenny Pope (Sally Phillips) was a high-flying executive living in a large house in leafy west London. That came to an abrupt halt when she lost her job. She says this was due to "structural changes" at the firm, but it might have been more to do with a heated altercation with a work colleague. Things went from bad to worse when Jenny's house was repossessed and now she's had to move her husband, self-styled entrepreneur Nick (Darren Strange) and two teenage children, Sam (Christian Lees) and Becky (Jadie Rose Hobson), into her parents' - Len (Tom Conti) and Alma (Susie Blake) house in Kettering, with hilarious consequences. Purely on a temporary basis, of course, Jenny's determined to climb back up the ladder and get back to her old life, no matter what it takes.

Tune in to witness how this hapless family struggle to cope when they are forced to abide by parental rules. Parents is available to own on DVD 29th July 2013, courtesy of Channel 4 DVD. 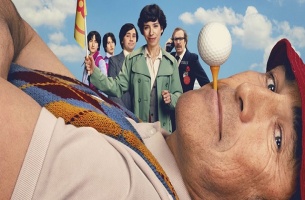 HotDVDBD
The Phantom of The Open, released on DVD and Blu-ray 25th July 2022 from Universal Pictures (UK), tells the remarkable true story of Maurice Flitcroft who managed to gain entry to the 1976 British Open qualifying, despite never playing a round of golf before. END_OF_DOCUMENT_TOKEN_TO_BE_REPLACED
Comments
UHD Releases News Pick

UHD
An expert cutter must outwit a dangerous group of mobsters in order to survive a fateful night in The Outfit, released 1st August 2022 on DVD, Blu-ray and 4K UHD from Dazzler Media. END_OF_DOCUMENT_TOKEN_TO_BE_REPLACED
Top PicksView