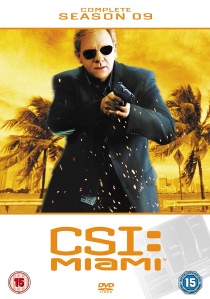 NewsTV SeriesThrillerCrime
News Article Go back to homepage
Put your faith in Miami's finest as everybody's favourite scorching spin-off; CSI: Miami - The Ninth Season erupts on to DVD on 25th June 2012, from Momentum Pictures.
Momentum Pictures
15 hours 29 minutes
25/06/2012
Thank you for supporting DVD365.net when you order using the link(s) below. As an Amazon Associate we earn from qualifying purchases
Buy DVD
Information

Put your faith in Miami's finest as everybody's favourite scorching spin-off; CSI: Miami - The Ninth Season erupts on to DVD on 25th June 2012, from Momentum Pictures.

Follow Florida's combined team of police and forensic scientists as they encounter a tropical blend of people, culture, nightlife and crime, working together to unearth intricate and obscure clues and crack the cases plaguing the underbelly of the sunshine state. The experts continue to make the felons feel the burn and witness some shocks and scares of their own along the way in this latest action-packed 22 part series.

Things are really heating up as this tumultuous season hurls the team through some of their weirdest scenarios yet, caught up in a hurricane of double murders, serial killings, stoning, kidnap and plane crashes....every one-of-a-kind case tests the team commitment to justice and each other. Even an attack by a bow and arrow won't slow them down, but one singular, tragic event in the cliff-hanger season premiere may threaten to bring everything to a sudden standstill.

Join lead criminalist Horatio Caine and his state-of-the-art forensics team as they investigate hot and steamy Miami crimes using cold hard facts. The evidence leads them to seedy nightclubs, privileged suburbs and explosive family secrets. The stakes are higher than ever before, because this time it's personal as Horatio comes face to face with the man who killed his wife and the team lose one of their own.

CSI: Miami recently accrued the mantle of World's Most Popular TV show, proving that engaging, intelligent plotlines and heart-racing action is an award winning combination. Feel the Miami heat and get swept away as CSI: Miami - The Ninth Season comes to DVD on 25th June 2012.

BD
A 13-year-old girl named Meilin turns into a giant red panda whenever she gets too excited in Disney and Pixar's 25th feature film Turning Red, released on DVD, Blu-ray and 4K UHD 2nd May 2022 from Walt Disney Home ... END_OF_DOCUMENT_TOKEN_TO_BE_REPLACED
Top PicksView