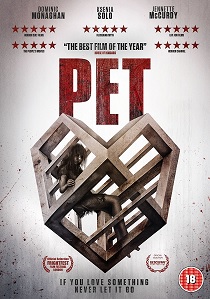 NewsHorrorThriller
News Article Go back to homepage
Pet, released on DVD and Blu-ray by Signature Entertainment on 13th March 2017, is a psychological thriller about a man who bumps into an old crush and subsequently becomes obsessed with her, leading him to hold her captive underneath the animal shelter where he works.
Dominic Monaghan, Ksenia Solo, Jennette McCurdy, Da'Vone McDonald, Nathan Parsons
Carles Torrens
Nick Phillips
Signature Entertainment
1 hour 30 minutes
13/03/2017
#Pet
Thank you for supporting DVD365.net when you order using the link(s) below. As an Amazon Associate we earn from qualifying purchases
Buy DVD
Buy BD
Information

The haunting, psychological horror Pet follows Seth, a lonely man working in an animal shelter. His monotonous routine is broken one day when he bumps into Holly, a girl from school who he soon becomes obsessed with. However, when she rejects his advances, Seth's obsession reaches a terrifying new level, with Holly hiding secrets of her own.

Helmed by Award Winning director Carles Torrens (Apartment 143, ABCs of Death 2.5) and starring Dominic Monaghan (Lord of the Rings trilogy), Ksenia Solo (Lost Girl, Black Swan) and Jennette McCurdy (Between, Sam & Cat), Pet is a dark and disturbing love story asking how much you could sacrifice in the name of love?

Pet is released on DVD and Blu-ray by Signature Entertainment on 13th March 2017.