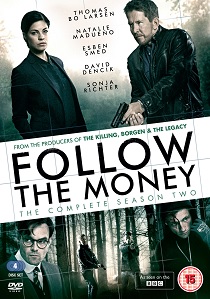 Nordic Noir & Beyond is thrilled to announce the DVD Box Set release of the complete second season of the Danish financial crime thriller Follow the Money on 10th April 2017.

Follow the Money takes us into the world of economic crime in the banks, on the stock exchanges, and in the board rooms. It is the story of speculators, swindlers, corporate moguls and the crimes they commit in their hunt for wealth. It is also the story of the rich, the poor, the greedy and the fraudulent who'll go to any lengths to build the lives of our dreams.

A seemingly insignificant investigation into a small carpentry business that went bankrupt under mysterious circumstances catches Mads' (Thomas Bo Larsen) attention, and soon he gets wind of a huge case involving a major bank. Claudia (Natalie Madueño), who has paid dearly for her involvement in Energreen, is now given an opportunity to atone for all the wrong choices she made, whilst Nicky's (Esben Smed Jensen) unique skills earn him an exciting job, albeit at a high price.

BD
Starring Hugh Laurie and written by David Hare, Roadkill, released on DVD and Blu-ray 9th November 2020 from Dazzler Media, is a fictional thriller about a self-made, forceful and charismatic ... END_OF_DOCUMENT_TOKEN_TO_BE_REPLACED
Hot PicksView