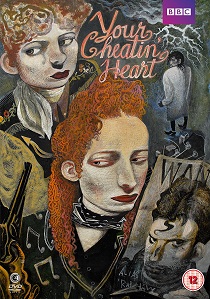 John Byrne's Your Cheatin' Heart is the classic Scottish country and western series that helped make a star of Tilda Swinton. And now, 25 years after it first aired, it finally comes to DVD for the very first time thanks to Second Sight.

Created by writer John Byrne, as his follow up to the acclaimed and hugely successful Tutti-Frutti, the new DVD release features stunning newly created original artwork from Byrne who is also an artist, and will be released as a two-disc set on 4th May 2015.

This six-part series explores the country music scene in an unsentimental portrayal of Glaswegian life and culture. Local food and wine correspondent Frank McClusky falls in love with waitress Cissi Crouch. Unfortunately for him, she's the wife of a convict, who is serving time for a crime he didn't commit. As Frank's life becomes more embroiled with Cissi's he goes on a mission to track down the guilty men.

BD
Pixar Animation Studios presents Cars, the high-octane adventure comedy that shows life is about the journey, not the finish line, zooming in for the first time on 4K Ultra HD 19th July 2021, ... END_OF_DOCUMENT_TOKEN_TO_BE_REPLACED
Top PicksView