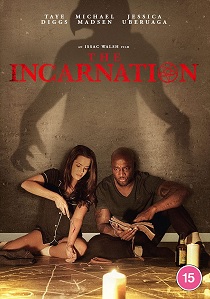 NewsHorrorThriller
News Article Go back to homepage
Based on the legendary demon Mammon, The Incarnation, released on DVD 7th March 2022 from 101 Films, is a twisted tale of greed about a young couple chasing the American dream.
Michel Madsen, Taye Diggs, Jessica Uberuaga, Rich Paul
Isaac Walsh
Mike Hatton
101 Films
1 hour 30 minutes
07/03/2022
#TheIncarnation
Thank you for supporting DVD365.net when you order using the link(s) below. As an Amazon Associate we earn from qualifying purchases
Buy DVD
Information

This devilish horror based on the legendary demon Mammon from Isaac Walsh in his directorial debut, gets its UK premiere on DVD and digital 7th March 2022 courtesy of 101 Films.

Struggling young couple Brad (Taye Diggs) and Jess (Jessica Uberuaga) move to LA In search of a better life. When they stumble across the perfect property, they seize it with both hands, and their luck begins to change... but is it too good to be true?

With their fortunes taking a miraculous turn, their thirst for success and riches cannot be quenched... but they soon learn that greed comes at a hefty price.

It becomes increasingly apparent that behind the seemingly luxurious walls lurks something deadly... An ancient evil that will stop at nothing to get what it wants...

And the American dream descends into an unimaginable nightmare.

HotUHD
Say the 'B' word three times and have a wonderful Day-O as Tim Burton's Beetlejuice arrives for the first time on 4K UHD 31st August 2020 from Warner Home Video. END_OF_DOCUMENT_TOKEN_TO_BE_REPLACED
Top PicksView