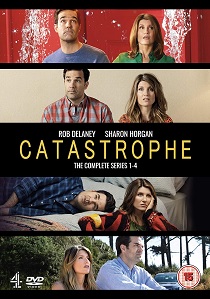 Starring and written by Sharon Horgan and Rob Delaney, all four series of the hit Channel 4 sitcom Catastrophe is released on DVD 11th February 2019 from Spirit Entertainment.

Instant chemistry, accidental pregnancy and genuine disaster provide the foundation for the flaming hovel of a relationship between Rob and Sharon. This hit comedy series sees them take their trademark havoc into parenthood, but can they survive an unexplained receipt for the morning after pill?

With their relationship on shaky ground, can they attempt to weather unemployment, mortgages, children who bite, Brexit, jealous co-workers, drunken mistakes, friends in rehab, disastrous job interviews, insane family, and, of course, keeping the children alive?