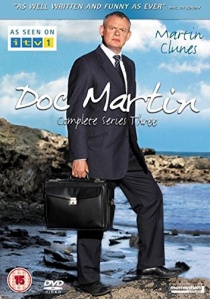 It seems the grumpiness is acute - and chronic. The bad mood is no longer in remission. All the symptoms are there: the truculence, the tactlessness, the caustic take on everyone and everything. Martin Clunes is back as Doc Martin, the man whose bedside manner leaves a lot to be desired. ITV1's prime time award-winning series and now officially the UK's No. 1 drama series for 2007, Doc Martin Series 3 is out to buy on 18 February 2008 courtesy of Momentum Pictures.

Nearly 10 million viewers tuned in for the return of Britain's favourite medical grump. In the picture postcard Cornish village of Portwenn, eternally grumpy GP Dr Martin Ellingham will always and only be "Doc Martin". This of course only irritates his irascible, curmudgeonly nature even further, as he continues to upset the otherwise convivial community.

Series 3 follows the ongoing accidents, emergencies and comic mishaps in Portwenn as the good doctor bumbles through life, all the while trying to pursue his burgeoning but seemingly ill-fated romance with headmistress, Louisa Glasson (Caroline Catz). Martin's clumsy attempts to woo her have so far failed ... But could a breakthrough in their turbulent relationship mean wedding bells?

Aunt Joan (Stephanie Cole) is still trying her best to provide him with emotional support in the face of the villagers' disquiet. But even she despairs at his caustic comments, especially when romance blossoms for her with a new man in the village. While son Al (Joe Absolom) travels the world, Bert Large (Ian McNeice) decides it's time to abandon Portwenn's plumbing troubles and pursue a new career - as a restaurateur, with disastrous consequences.

Pauline Lamb (Katherine Parkinson), the feisty surgery receptionist, is bored with her job and needs a new challenge. So the doctor arranges for her to train as a phlebotomist - but a dangerous addiction threatens to ruin her life. And new to Portwenn this time is PC Joe Penhale (John Marquez), who has ideas way above his station. And agoraphobia. And narcolepsy. Not great for a policeman.

So book your appointment with Doc Martin - if you dare. (To be taken in moderation after dinner with a nice cup of tea. Keep out of the reach of anyone with a fragile ego.)