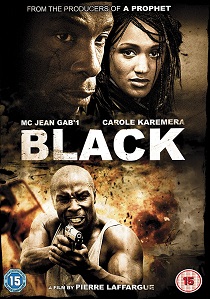 The spirit of Blaxploitation classics such as Super Fly, Shaft and Truck Turner is given a modern day makeover in the action-thriller, Black, released on DVD and Blu-ray by Anchor Bay Entertainment on 14th February 2011, and the directorial debut feature from Pierre Laffargue.

Produced by Marco Cherqui (A Prophet) and starring French hip-hop artist MC Jean Gab'1 (the District 13 movies), Carole Karemera (Sometimes In April), Francois Levantal (A Very Long Engagement; D'Artagnan's Daughter) and Anton Yakovlev (The Beat That My Heart Skipped), Black is "a slick, fun, French heist flick" (Eye Weekly) with a supernatural sting in the tail that sees its eponymous protagonist and anti-hero travelling from Paris to West Africa and the Senegalese capital of Dakar in order to pull off the biggest score of his criminal career.

When an armed raid on a security van in Paris goes horribly wrong, one of the gunmen, Black (MC Jean Gab'1), decides to lie low until the dust settles. That is until he receives a call from his cousin in Senegal supplying information about a stash of uncut diamonds being stored in a poorly guarded bank in Dakar. Eyeing the opportunity to make one final score that would set him up for life, Black travels to Africa and hooks up with a small group of fellow thieves who can help him pull off the heist.

Unfortunately, news of the diamonds and their insecure location travels fast and Black and his crew aren't the only ones with their eyes on the prize. Also looking to get their hands on the jewels are a crazed, mercenary Russian general (Yakovlev), a ruthless, reptilian arms dealer (Levantal) and his African voodoo sorceress mistress (Mata Gabin), and a corrupt, female Interpol agent called Pamela (Karemera). As his team rapidly begins to fall apart in the ensuing melee to claim the diamonds first, Black once again finds himself alone, running and fighting for his life against seemingly unbeatable odds.

Described by Eye For Film as a "popcorn movie with oodles of French cool", Black is a affectionate and worthy tribute to the Blaxploitation genre right down to its energetic soundtrack of funk, jazz and soul by artists such as the film's star MC Jean Gab'1, Eumir Deodato, Fela Kuti, Brass Construction, Don Cherry and Roy Ayers.