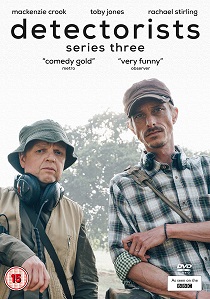 Can you dig it? Mackenzie Crook and Toby Jones return for more comedy gold in a brand-new series of the award-winning Detectorists. Following its broadcast on BBC Four Detectorists Series Three arrives on DVD alongside the box set release of Detectorists Complete Series One to Three including Christmas Special on 18th December 2017 courtesy of Acorn Media International.

We're back on the trail again with Andy (Mackenzie Crook - The Office) and Lance (Toby Jones - The Girl), two friends who share a devotion to metal detecting. With their eyes on a particular plot of land, they both dream of the one big find which would bring history to life and change their lives in the process.

Having returned from Africa, Andy and Becky (Rachael Stirling - Snow White and the Huntsman), have moved in temporarily with her mother (Diana Rigg - The Avengers), with all the challenges that accompany living with the mother-in-law. Lance is trying to kick-start his relationship with Toni (Rebecca Callard - Ordinary Lies), but her living on a barge makes him queasy and his daughter staying at the flat leaves the situation rather precarious - with none of this being helped by the reappearance of his ex-wife. Meanwhile Lance and Andy's search for gold continues as they face enemies old and new.

3D-BD
The surviving members of the resistance face the First Order once again, and the legendary conflict between the Jedi and the Sith reaches its peak as Star Wars: The Rise of Skywalker is released on ... END_OF_DOCUMENT_TOKEN_TO_BE_REPLACED
Top PicksView