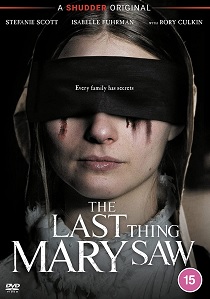 Every family has its secrets, and The Last Thing Mary Saw is a frightening secret audiences will want in on.

From Edoardo Vitaletti, in his directorial debut, this gothic horror features a stand-out cast, including horror favourite Isabelle Fuhrman (Orphan), Rory Culkin (Signs), Stefanie Scott (Insidious 3) and Judith Roberts (Orange Is the New Black, You Were Never Really Here), who give showstopping performances. Having premiered at the 2021 Fantasia International Film Festival, this dark and enchanting Shudder Original is now set to arrive on DVD and digital on 19th September 2022 from Acorn Media International.

We begin in Southold, New York, 1843, where we meet a young Mary (Stefanie Scott) with blood trickling from behind the blindfold tied around her eyes, as she is interrogated about the events surrounding her grandmother's mysterious death. As the story flashes back, we witness Mary, raised in a repressively religious and eerily claustrophobic household, finding fleeting happiness in the arms of Eleanor (Isabelle Fuhrman), the family's maid. Her family, who believe they are seeing, speaking, and acting on God's behalf, view the girls' relationship as an abomination to be dealt with as severely as possible, inflicting brutal punishments.

The couple attempts to carry on in secret, but someone is always watching or listening, and the wages of perceived sin threaten to become death, with the tension only heightened by the arrival of an enigmatic stranger (Rory Culkin) and the revelation of greater forces at work...

The Last Thing Mary Saw oozes with palpable oppression, suspense, and sin. This dark and dread-filled horror promises to sate genre fans' thirst for supernatural twists and innate terror. Audiences should get ready to witness The Last Thing Mary Saw, a painfully tense, heart-wrenching and impossible to forget film.

Related Articles
Unchained, The Chumscrubber, The Night Listener, Down In The Valley, Signs, Lords Of Chaos
I.T., Insidious 3
Orphan, Down A Dark Hall
Eraserhead, You Were Never Really Here
Salt
Comments
Hot Pick

HotUHD
After moving to a new town, two brothers discover that the area is a haven for vampires as the classic The Lost Boys is released on 4K UHD 20th September 2022 from Warner Home Video. END_OF_DOCUMENT_TOKEN_TO_BE_REPLACED
Top PicksView