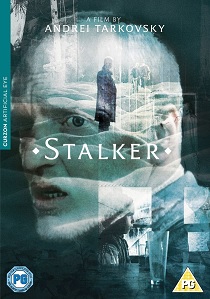 Deep within the Zone, a bleak and devastated forbidden landscape, lies a mysterious room with the power to grant the deepest wishes of those strong enough to make the hazardous journey there. Desperate to reach it, a scientist and a writer approach the Stalker, one of the few able to navigate the Zone's menacing terrain, and begin a dangerous trek into the unknown.

Tarkovsky's second foray into science fiction after Solaris is a surreal and disturbing vision of the future. Hauntingly exploring man's dreams and desires, and the consequences of realising them, Stalker, adapted from Arkady & Boris Sturgatsky's novel Roadside Picnic, has been described as one of the greatest science fiction films of all time.

Stalker is released on DVD and Blu-ray by Curzon Artificial Eye on 22nd August 2016.

DVD
Catherine finally takes the Russian throne for her own - but if she thought coup-ing her husband was difficult, it's nothing compared to the realities of liberating a country that doesn't want to be in The Great: Season Two, ... END_OF_DOCUMENT_TOKEN_TO_BE_REPLACED
Top PicksView