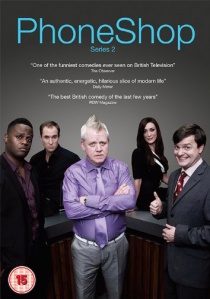 On High Street UK the priority is to 'shift units, make money, smash targets...' and no one knows that better than the staff of PhoneShop as the complete second series of the British sitcom arrives back on DVD from 2nd September 2013, courtesy of 2entertain.

With top salesman Little Gary Patel in jail, times are hard and getting harder for the sales staff of PhoneShop. If they are to retain their status as "Kings of the High Street" they need to ensure that every mug punter within five square miles gets locked down to the worst, most expensive mobile phone contract known to mankind.