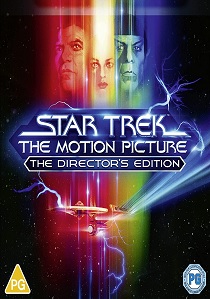 Set a course for the final frontier as the newly restored Star Trek: The Motion Picture - The Director's Edition arrives5th September 2022 on 4K Ultra HD Blu-ray with a bonus Blu-ray Disc filled with new and legacy special features from Paramount Home Entertainment. The film will also be released in a Limited-Edition Collector's Set entitled The Complete Adventure, which includes the new Director's Edition, the theatrical cut, and a special longer cut all on 4K Ultra HD along with special features on Blu-ray.

In 2001, director Robert Wise revisited the film to refine the edit and enhance the visual effects. His updated vision was released on DVD in standard definition and embraced by fans but has never been available in higher definition until now.

Meticulously assembled and restored by producer David C. Fein with post-production supervisor Mike Matessino, both of whom originally collaborated with Wise, the film has been prepared for presentation in 4K Ultra HD with Dolby Vision high dynamic range (HDR) and a new powerful and immersive Dolby Atmos® soundtrack.

Fein and Matessino assembled a team of visual effects experts, led by returning visual effects supervisor Daren R. Dochterman, and utilised the extensive resources in the Paramount Archives to recreate the effects not just in HD, but in Ultra HD. After more than six months of painstaking work, the updated movie looks and sounds better than ever while staying true to Wise's original intention.