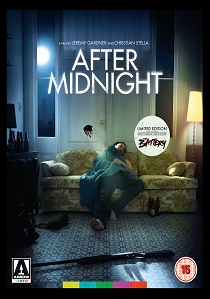 Ten years into his small-town romance with Abby, bartender Hank wakes up alone in an empty home with nothing but a cryptic parting note for company. As Hank drinks himself into heartbreak and depression, Abby's sudden departure soon becomes the least of his concerns as a mysterious monster starts clawing at his door on a nightly basis.

As the threat outside his door intensifies, Hank calls on Abby's police officer brother Shane and best friend Wade for help. With no trace of the monster - and his behaviour becoming more erratic - his friends remain unconvinced of the creature lurking outside, and Hank slips further into his own paranoia and loneliness.

After Midnight is released on Blu-ray 8th June 2020 from Arrow Video.