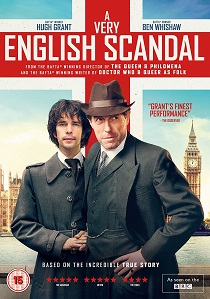 A Very English Scandal is the shocking true story of the first British politician to stand trial for conspiracy to murder. It's the late 1960s, homosexuality has only just been decriminalised, and Jeremy Thorpe, the leader of the Liberal party and the youngest leader of any British political party in a hundred years, has a secret he's desperate to hide. As long as Norman Scott, his vociferous ex-lover is around, Thorpe's brilliant career is at risk, and eventually Thorpe can see only one way to silence Scott for good.

The trial of Jeremy Thorpe changed politics forever as the British public discovered the darkest secrets of the Establishment and the lengths they'd go to conceal them.

DVD
When the world is locked down, they'll find their ticket out in Locked Down, released on DVD 7th June 2021 from Warner Home Video. END_OF_DOCUMENT_TOKEN_TO_BE_REPLACED
Top PicksView

DVDTV
12/10/2021
Delve into the depths of deceit and control in a brand-new gripping psychological thriller, Angela Black, is set to receive its UK DVD debut from Acorn Media International on 15th November 2021.

From The Haunting of Hill House creator Mike Flanagan and producer Trevor Macy comes The Haunting Of Bly Manor, the next highly anticipated chapter of The Haunting anthology series, released on DVD and Blu-ray 18th October 2021 from Paramount Home Entertainment.
Movie quote