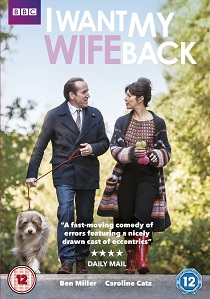 I Want My Wife Back, released on DVD by BBC Worldwide on 30th May 2016, is a new romantic comedy series starring Ben Miller, Caroline Catz (Doc Martin, DCI Banks) and Jan Francis (Just Good Friends, Bad Girls) about one man's quest to win back his wife.

Murray (Miller) is the nicest guy you could hope to meet. He's a devoted husband; he works hard, and is a loyal friend and colleague. When he throws a surprise 40th birthday party for his wife Bex (Catz), it's Murray who gets the biggest surprise of the night - she's leaving him.

Murray's quest to win Bex back is going to be quite a struggle. Whether accidentally assaulting a romantic rival, or failing to impress Bex with a tenuous celebrity connection, he invariably manages to make the situation worse. But will his mission to resurrect his marriage end in triumph, or disaster?

Written and produced by Mark Bussell and Justin Sbresni (The Worst Week Of My Life), I Want My Wife Back is a co-production between Mainstreet Pictures and Busby Productions. The director is Paul Norton Walker (Boy Meets Girl) and the executive producers are Sally Haynes and Laura Mackie. BBC commissioning editor is Chris Sussman.

DVD
Tender and violent, terrifying and comic, The English, released on DVD 19th December 2022 from Dazzler Media., takes the arrows and bullets of its genre only to twist them into a uniquely compelling parable on gender, race, ... END_OF_DOCUMENT_TOKEN_TO_BE_REPLACED
Top PicksView