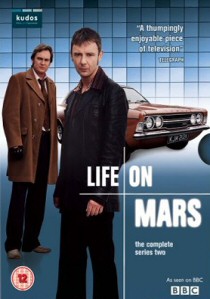 John Simm is back as DI Sam Tyler, the time travelling detective who, after a car accident, has found himself in 1973, in the second and final series of the Award winning Life on Mars, which comes to DVD on 9th April 2007 from Contender Home Entertainment. Returning alongside Simm are Philip Glenister, Liz White, Dean Andrews and Marshall Lancaster as Tyler's Seventies colleagues, who are only just getting to grips with the DI's new-fangled ways of investigating crime.

After months of waiting to find out whether Sam Tyler is in a coma, mad, or really has travelled back in time, fans will discover the truth at the beginning of April and will be able to re-live Sam's adventure time and again as the second and final series comes to DVD.

Marc Warren, as you have never seen him before, guest stars as Tony Crane, a ghost from Sam's 'future past'. Guest cast also include Ray Emmet Brown (Outlaws) as Glen Fletcher, a fresh faced recruit who deals with racist attitudes from colleagues; Kevin McNally (Pirates of the Caribbean: Dead Mans Chest) as Gene's mentor with a secret. and Georgia Taylor (The History Boys) as a beauty rep, in fear for her life. Eva Pope (Bad Girls) also stars as the wife of a wife-swapping second hand car dealer and Ian Puleston-Davies (Vincent) as local hard man 'Toolbox', who has an unusual way of helping police with their enquiries!

Life on Mars: Series 2 DVD also has exclusive extras including a behind the scenes documentary about the amazing bomb blast stunt in episode three, including interviews with the cast and stunt co-ordinator, the late Peter Brayham, and a feature on the making of the Camberwick Green pastiche, made by Hot Animation, that features at the beginning of episode five and has became a huge hit on the internet. 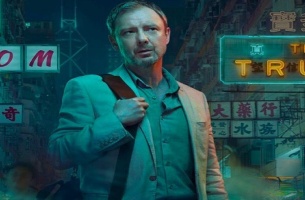 HotDVDBDUHD
After more than thirty years of service as one of the Navy's top aviators, Pete 'Maverick' Mitchell is back where he belongs as Top Gun: Maverick flies onto DVD, Blu-ray and 4K UHD 31st October 2022 from Paramount Home Entertainment. END_OF_DOCUMENT_TOKEN_TO_BE_REPLACED
Top PicksView