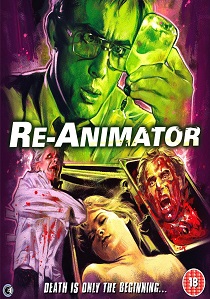 Second Sight is delighted to announce the re-release of seminal horror Re-Animator on 2-disc Blu-ray on 14th March 2016, in classic packaging and packed full of outstanding special features.

One of the most celebrated, outrageous, and original 80s horror films Re-Animator is brought back to life on Blu-ray in all its gory glory. This horror classic will be released as a two-disc set in standard double-disc case, complete with a double-sided sleeve featuring the original poster and artwork by Graham Humphreys, two versions of the gorefest that is Re-Animator and tons of special features including deleted scenes, commentaries, a documentary, interviews and more.

Brilliant, if somewhat deranged, medical student Herbert West arrives at Miskatonic Medical School and immediately sneers at his professor's outdated views on death. West has his own outlandish theories and has concocted a serum that will bring the dead back to life. Roping in fellow student Dan Cain their shocking experiments work all too well with horrific and very messy results.

DVD
In Disney's Mulan, released on DVD, Blu-ray and 4K UHD 10th November 2020, a fearless young woman risks everything out of love for her family and her country to become one of the greatest warriors ... END_OF_DOCUMENT_TOKEN_TO_BE_REPLACED
Hot PicksView