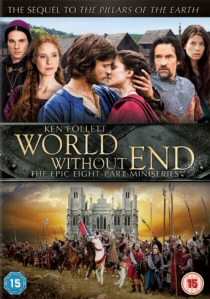 Conspiracies Will Be Exposed, Secrets Will Be Revealed. Ken Follett takes viewers back to his fictitious town of Kingsbridge, but 200 years later and with all new characters for fans to fall in love with. Experience the romance, tragedy and victory in the $46 million, eight-hour epic miniseries World Without End, which will air on Channel 4 January 2013 and debuts on Blu-ray and DVD on 18th February 2013 from Sony Pictures Home Entertainment.

Best-selling Welsh author Ken Follett has sold more than 130 million copies of his books worldwide. Eye of the Needle, Key To Rebecca, On Wings of Eagles and The Pillars of the Earth are among his numerous, critically acclaimed suspense and historical novels that have been adapted into films and TV mini-series, capturing top ratings, as well as Emmy Awards® and Golden Globe® nominations.

In World Without End, times are tougher than ever in England as the country is on the brink of war with France and the citizens are facing The Plague that will eventually decimate one-third of its population. A feisty young woman (Riley) inspires her medieval town to confront the most powerful forces of her time -- namely the Church and the Crown -- as they fight to save their town from ruin and ultimately usher in a new era of freedom, innovation and enlightenment.

The DVD also includes a behind-the-scenes featurette, "The Making of Ken Follett's World Without End", providing a look at the making of the film.

England is on the brink of a devastating war with France that will last over a hundred years and The Bubonic Plague, which will wipe out a third of Europe's population before it is done, is spreading. Caris (Riley), a visionary young woman, struggles to rise above the suffering and oppression in order to lead her people out of the Dark Ages. With her lover, Merthin (Tom Weston-Jones), she builds a community in Kingsbridge that stands up to the church and the crown. Together, they unearth a dangerous secret and must fight to save their town from ruin, ultimately ushering in a new era of freedom, innovation and enlightenment.